When exploring solutions such as Wind for Industry or Managed High Voltage, a variety of industry terms are often used.

Below is a collection of key terminology and acronyms, related specifically to wind energy, electricity, and the solutions One Energy provides.

Annual Energy Production (AEP)
The energy generated by the turbine(s) over the course of one year.

Blade
The long fiberglass pieces designed to catch the wind at the top of the wind turbine, causing the turbine to turn. Three blades connect to the hub to create the rotor.

Capacity Factor (CF)
The ratio of the actual power output over a period of time to the theoretical maximum output if generation was at rated capacity continuously for the same time period. Typical CFs in the wind industry range from 25-40%.

Commercial and Industrial (C&I) Facility
A facility that participates in commercial or industrial activities. They are typically large energy consumers and are One Energy’s target customer.

Distribution System
A power-line system that comprises the parts of an electric power system between the sub-transmission system and the consumers’ service switches. Typically, these are the power lines installed on wooden poles that actually connect to a facility.

Detailed Evaluation
A report completed after an Initial Evaluation, to confirm the technical viability and commercial implications of an on-site wind energy project for a customer facility. It summarizes the due diligence for a Wind for Industry project. The report is completed prior to construction commencement and follows One Energy’s methodologies.

Energy Investment Tax Credit (ITC)
A federal financial incentive that is a one-for-one credit against a net tax liability.

Gear Box
The structure housing the process where gears connect the low-speed shaft of the rotor to the high-speed shaft and increase the rotational speeds from about 30 to 60 revolutions per minute (rpm) to about 1200 to 1500 rpm, which is the rotational speed required by most generators to produce electricity. The gear box is a heavy and expensive part of the wind turbine. Some turbines now utilize “direct-drive” generators that operate at lower rotational speeds, therefore eliminating the need for gear boxes.

Green Campus® Alternative Energy Property
The physical premises and layout of a Wind for Industry project.

Hub
A cast structure to which the blades are attached, creating the rotor (hub + 3 blades = rotor).

Independent System Operator (ISO)
An organization formed at the direction or recommendation of the Federal Energy Regulatory Commission (FERC). In the areas where an ISO is established, it coordinates, controls, and monitors the operation of the electric power system.

Initial Evaluation
A report to assess the technical viability and commercial implications of an on-site wind energy project for a customer facility.

Kilowatt-Hour (kWh)
A unit of power equal to 1,000 watts of electricity used for one hour.

Nacelle
The cover that houses the generating components of a wind turbine, including the generator, gearbox, low and high speed shafts, controller, and brake assembly.

Net Metering
A series of state laws that state, for a given customer with a given generator (usually a clean energy generator), that the utility company can only bill based on the net electricity consumed at the end of the billing period. This means it does not matter when you use the energy or when you produce it, because you are only billed on the net difference. In some cases, utilities are required to pay for net excess generation. Laws vary widely throughout the country.

On-Site Generation Wind Energy
The use of a wind turbine to directly offset a facility’s electricity consumption under net-metering rules.

P-value
Exceedance Probabilities for a given variable. For example, a P90 energy production value denotes the production level predicted to be exceeded 90% of the time period.

Project Performance Report (PPR)
The PPR summarizes the losses and uncertainties of a Wind for Industry project and how they impact the Annual Energy Production (AEP). The energy production is provided by turbine, by month, and for varying P-values.

Power Purchase Agreement (PPA)
A contract between an energy provider and a customer who wishes to purchase energy at a predetermined rate for an extended period of time.

Rated Wind Speed
The wind speed at which the turbine produces its nameplate-rated power.

Renewable Energy Agreement (REA)
One Energy’s version of a Power Purchase Agreement. An REA is a contract between two parties: one who generates electricity for the purpose of sale (the seller), and one who purchases the electricity (the buyer).

Renewable Energy Credit (REC)
A certificate that is proof that one megawatt hour (MWh) of electricity was generated from a renewable energy resource. Once the electricity provider has fed the electricity into the grid, the REC they received can then be sold on the open market as a commodity. RECs provide an additional income stream to the energy provider, thus making it a bit more attractive to produce “green” energy.

Rotor
The blades and the hub together on a wind turbine.

Total Addressable Market (TAM)
The available revenue opportunity for a product or service. One Energy’s TAM is defined as every county in which a Wind for Industry project offers lower kilowatt-hour pricing than the average industrial electric grid.

Transformer
A piece of electrical equipment used to step up or step down voltage. Most turbines have a dedicated transformer to step up their voltage to the grid voltage.

Turbine
A device for converting the flow of a fluid (air, steam, water, or hot gases) into mechanical motion that can be used to produce electricity.

Turbulence Intensity (TI)
The ratio of the wind speed standard deviation to the mean wind speed.

Wind for Industry
A wind energy project designed to achieve a significant reduction of an industrial facility’s electrical consumption from the grid. These projects involve installing one or more utility-scale wind turbines and interconnecting them on the facility’s side of their utility meter.

Wind Speed
The speed of the wind usually denoted in meters per second (m/s) or miles per hour (mph).

Wind Direction
The direction of the wind usually denoted in degrees or cardinal direction.

Corporate Value #2: Be Professors, Not Salesmen.

Corporate Value #3: Make Our Customers Smarter than the Competition’s Experts. 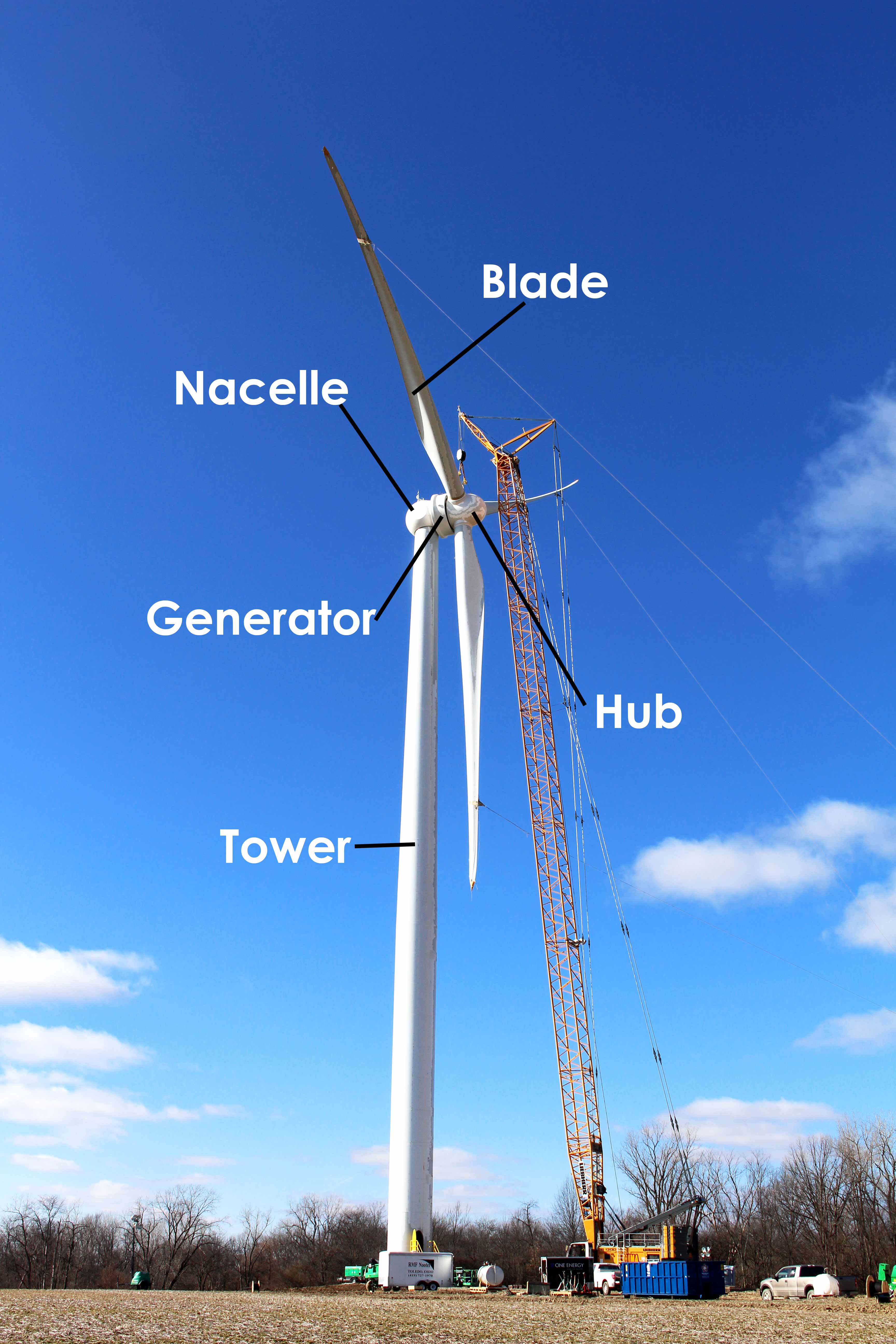 Parts of a Utility-Scale Wind Turbine