We know where our power comes from, and so do our customers. With One Energy’s Wind for Industry® projects, we install megawatt-class, utility-scale wind turbines behind the meter to directly power large industrial facilities. Our customers get reliable, on-site, clean energy that is cost-effective with a 20-year fixed rate.

How clean is your energy?

Ready to add a new acronym to your vocabulary?

At One Energy, we utilize a LiDAR (Light Detection and Ranging) unit to gather wind data. This unit uses an invisible laser to calculate the speed and direction of the wind. See if you have what it takes to solve this week’s problems, and check back on Friday for the answers! 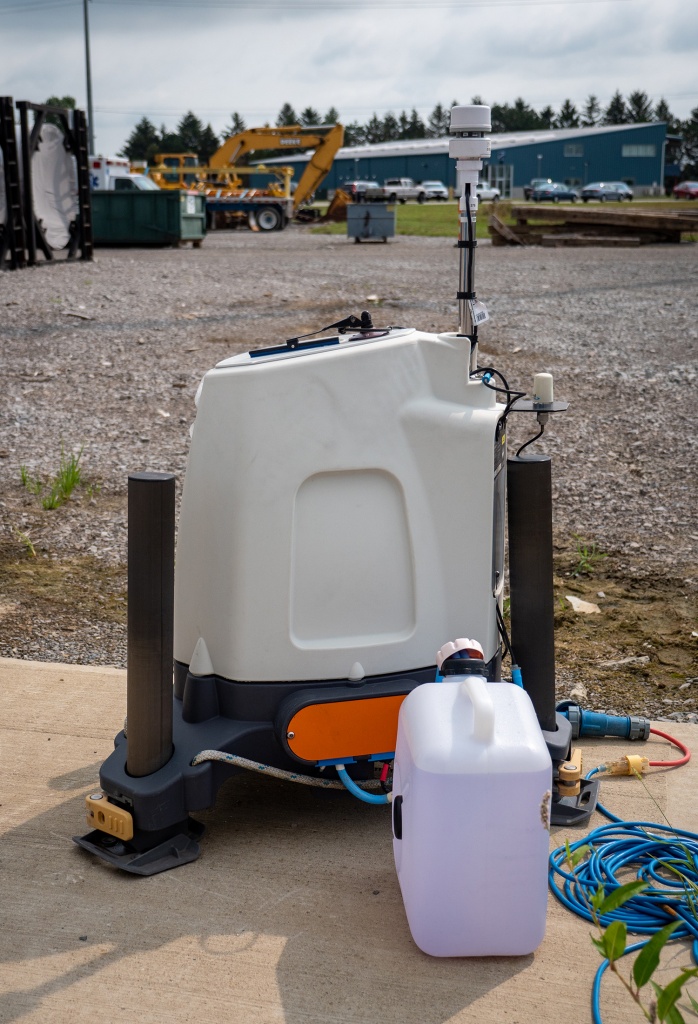 September 29, 2022 – Executive Thoughts | Be an Illuminator, Not a Diminisher

Earlier this year, I had the privilege of attending the University of Oklahoma’s 130th Commencement Ceremony and watching my daughter receive her master’s degree. David Brooks, an op-ed columnist for The New York Times, was the Commencement speaker. He opened with the typical college graduation jokes that drew laughs even though they weren’t particularly original or unexpected. But then he launched into the meat of his speech, delving into the importance of “moral acts of kindness,” and I found myself pulled into his message to the graduates about going forth into the world with the goal of being illuminators, not diminishers.

In our lives as executives – and, quite frankly, as human beings – we have multiple opportunities each day to illuminate those with whom we work, and we probably have even more opportunities to diminish them. What does that really mean? The literal definition of illuminate is about shining a light on something. In this context, however, I’m really talking about brightening someone – building confidence; encouraging thought, inquisitiveness, and innovation; and helping someone feel better about herself when she leaves your office than she did when she arrived. It is the opposite of diminishing – making someone feel less impressive; feel less valuable and smaller; and causing him to leave with less confidence and fewer ideas than when he arrived. Shouldn’t it always be our goal to illuminate?

The ability to illuminate comes from a broad range of interpersonal skills. Are you the kind of person who can throw a party that results in every single guest feeling welcome and included? Congratulations! You have probably mastered the skill set!! But just because the skill set doesn’t come naturally to you, doesn’t mean you can’t learn it. Take a psychology class. Read a book about emotional intelligence (maybe more than one…). Engage in conversations that raise your level of self-awareness. Invite feedback on your words and actions and their impact on those around you. Explore works of fiction that enhance your understanding of differences and increase your empathy. Understand what “mindfulness” and “being present in the moment” truly entail. Brush up on your etiquette – that suggestion may sound silly, but remember that at the core of manners and “polite society” is the goal of establishing a set of guidelines that everyone understands, so that everyone feels comfortable.

Brooks shared an often-told story about Winston Churchill’s mother who had dined with both William Gladstone and Benjamin Disraeli when the two men were competing for the position of Prime Minister of the United Kingdom. After her dinner with Gladstone, Lady Churchill said she left the dinner thinking that Gladstone was the cleverest person in England. After sitting with Disraeli, however, she left feeling that she was the cleverest person! And that, in a nutshell, is the essence of illuminating. It is being fully present and intent upon the subject at hand. It is paying the kind of attention to someone that is a moral act of kindness.

Take the social skills that you’ve acquired to work with you every day, and use them to observe, to evaluate, and then to attend to the people around you. Those “good” ways of paying attention are the ones that illuminate people. Eliminate the things that can pull your focus from the person who came to see you – everything from turning off your phone and clearing your desk to putting your computer screens to sleep. Do everything you can to give that one person in your office one hundred percent of your attention. Build on your ability to offer the kind of attention that changes people in a fundamental way. As Mr. Brooks said, “Treat every person like they have an immortal soul.” These are the actions that can truly illuminate.

Imagine how your organization could be different if all your co-workers felt illuminated. Could there be a greater flow of ideas and a more noticeable willingness to bring divergent and creative thoughts to the table? Could feeling more respected and more highly valued result in greater employee retention? If all employees felt more confident, could they also feel more empowered to effect positive change? And perhaps, more importantly, could your illumination of one employee result in his illumination of others? The “tone at the top” can certainly be illuminating. Unfortunately, it can also be diminishing. As executives, we have a significant role in setting the dimmer switch to the right spot, and I would argue that we have both a business and a moral responsibility to set it to “high.”

I love commencements. I love the pomp and the circumstance, the fanfare and the celebration, and the music and the academic regalia. I, of course, also love playing the proud parent and celebrating my kids’ accomplishments. Mostly, and much to the dismay of my children, I love the commencement speeches. I love the idea of trying to send new graduates out into the world with a goal. I was impressed with the University of Oklahoma, particularly with their integration of Oklahoma’s rich Native American heritage into their commencement ceremony.  But I was especially touched by their outreach to first-generation college students who comprise 25% of their undergraduate population. I can only hope that those students are greatly illuminated by their experience at OU, so much so that they can go out into the world and shine their light on others. There is no doubt that the world – and probably your workplace – needs illuminators. We need far more Benjamin Disraelis and perhaps fewer William Gladstones. As you approach your next meeting, make a mental note to be an illuminator. Do you have what it takes to be one?

Anne Bain is the Head of Accounting at One Energy.

Learn more about Anne and the One Energy team. 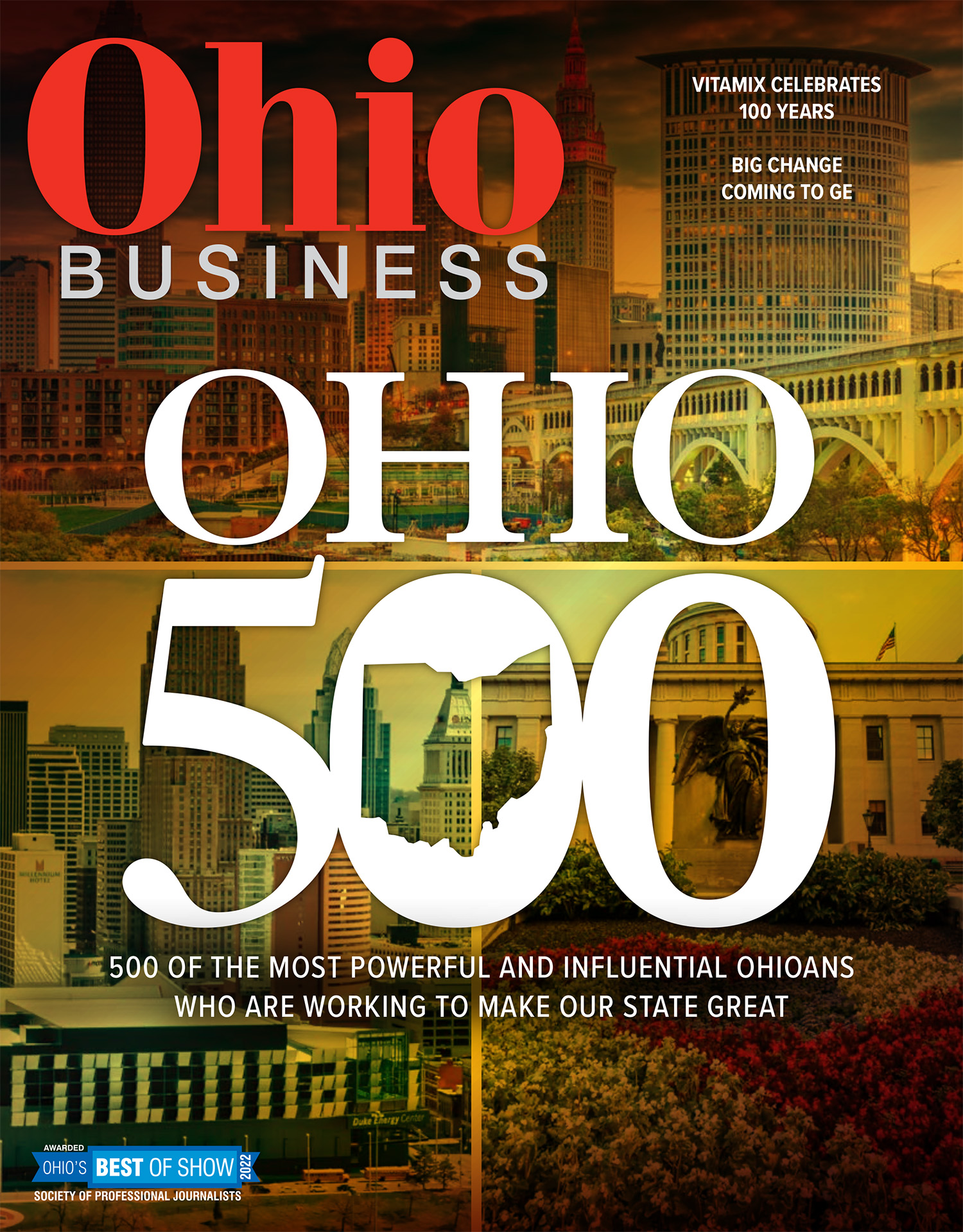 One Energy CEO, Jereme Kent, was listed as one of the 500 “most powerful and influential Ohioans who are working to make our state great.” by Ohio Business Magazine.

Check out Jereme’s profile, featured on page 46 of the publication. 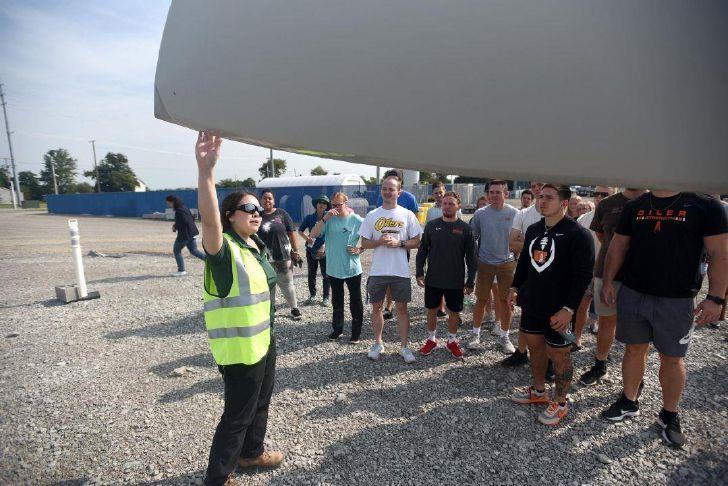 A hands-on field trip can be one of the most memorable learning experiences a student can have. This is why One Energy loves hosting student tours of our wind campus – here they can touch the turbine blades in our yard, step inside the base of a wind turbine to see how it operates, and quiz wind energy experts with all their brilliant questions.

Last Friday, a group of education students from the University of Findlay toured One Energy’s North Findlay Wind Campus to learn about our Wind for Industry projects and the future of wind energy. We’re honored so many local schools choose us as one of their field trip destinations. Having an authentic experience outside of the classroom is a powerful learning tool!

What’s your favorite field trip that you’ve been on?

Thank you to The Courier for capturing this learning experience! You can see their coverage here:  https://thecourier.com/news/408145/down-on-the-wind-farm/

One Energy is proud to partner with Ohio Energy Project for their third annual virtual field trip at our North Findlay Wind Campus on September 30, at 1 PM.

Learn how energy is harnessed and transformed into electricity while exploring turbine blade design. You’ll also hear from One Energy employees about career opportunities in Ohio’s rapidly growing wind industry. OEP’s Virtual Field Trips take teachers and students to energy sites, degree programs, and much more via Zoom, connecting learners with real-world professionals. Here’s a behind-the-scenes photo of last year’s virtual field trip. You can see that our tour is given LIVE, which means students receive real-time answers to all their brilliant questions. This year’s tour is just around the corner, so don’t forget to register here. 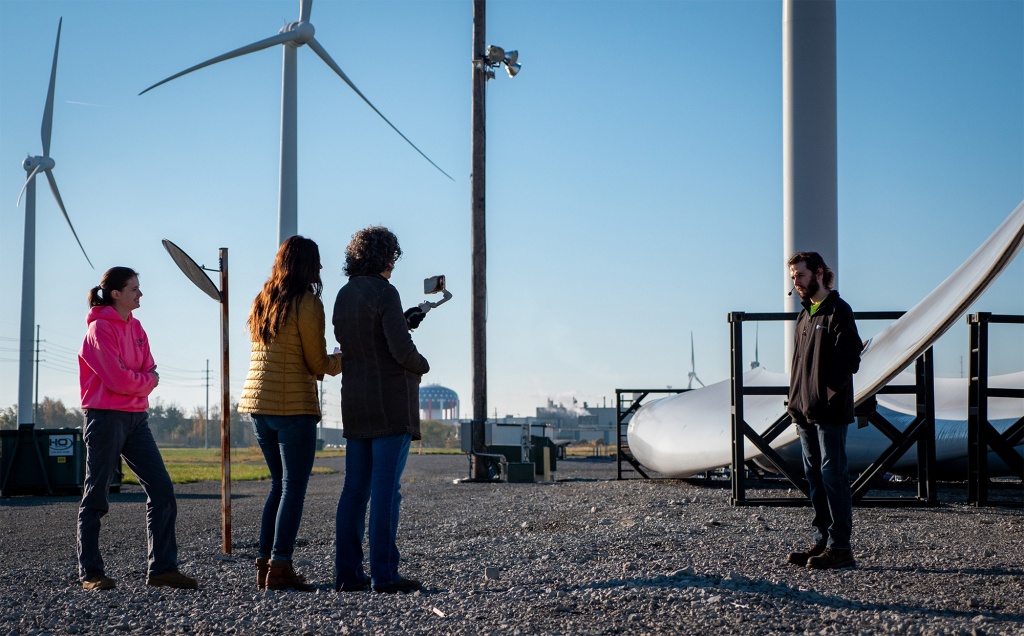 Did this week’s Wind Study leave you glowing with excitement?

On Monday, we asked you to use the concepts of reflection and refraction to solve how fast light travels through different materials and figure out at what angle light bounces off different surfaces.

You can check your answers here! 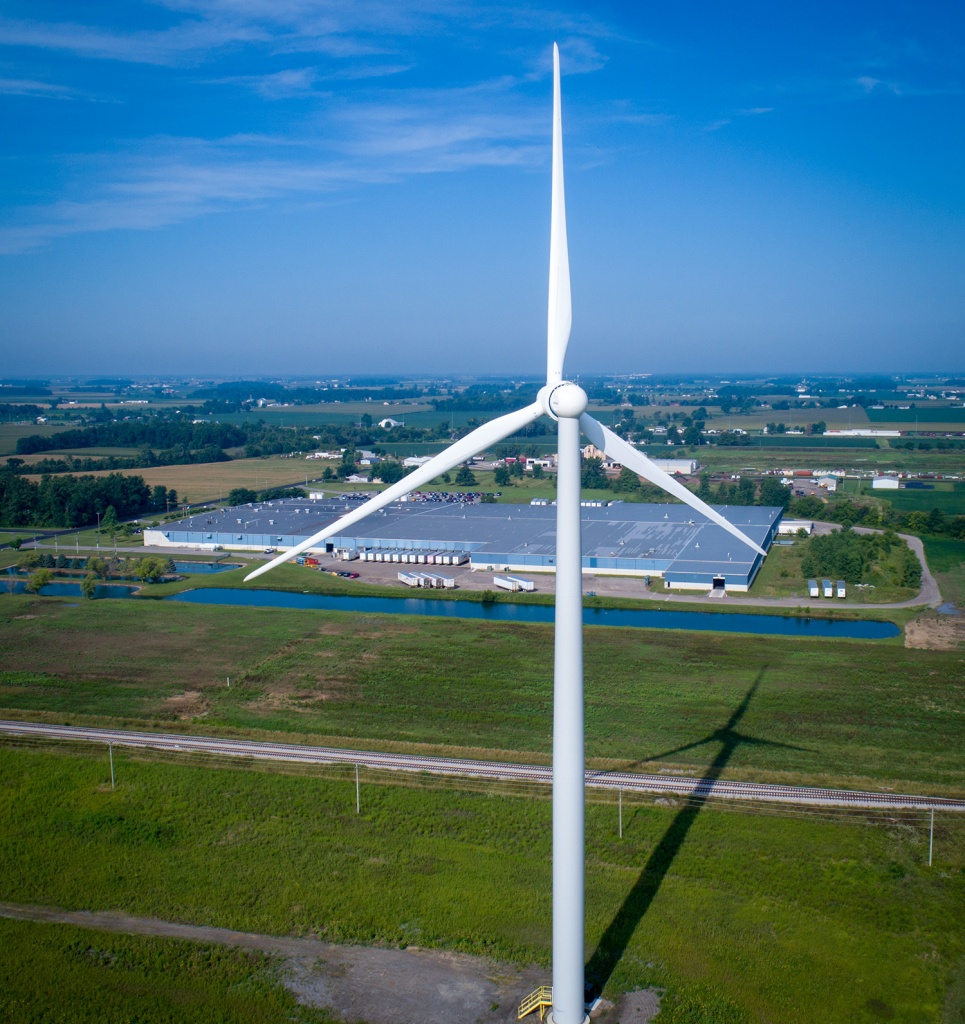 In this Safety Minute, Head of Construction Chelsea Bumb walks us through a recent example of continuous improvement involving our collection line trenching process.

Chelsea and her team started by identifying issues with the old trenching system. Collection line trenching was physically strenuous work, so they returned to the drawing board to simplify their process. The newly designed prototype eliminates a lot of labor-intensive work, replacing it with more predictable engineering methods that increase safety and efficiency. Our construction team continues brainstorming new improvements, working to make the system better.

Watch the video below, and be sure to subscribe to our YouTube channel so you don’t miss a minute.

For this week’s Wind View, we are excited to kick off our fall recruiting tour with the University of Michigan College of Engineering’s Fall Engineering Career Fair! On Monday, One Energy joined over 350 companies to chat with students about their interests in industrial energy and their futures in a STEM career. Keep an eye out as our recruiting team could be coming to a school near you. And of course, Go Blue! 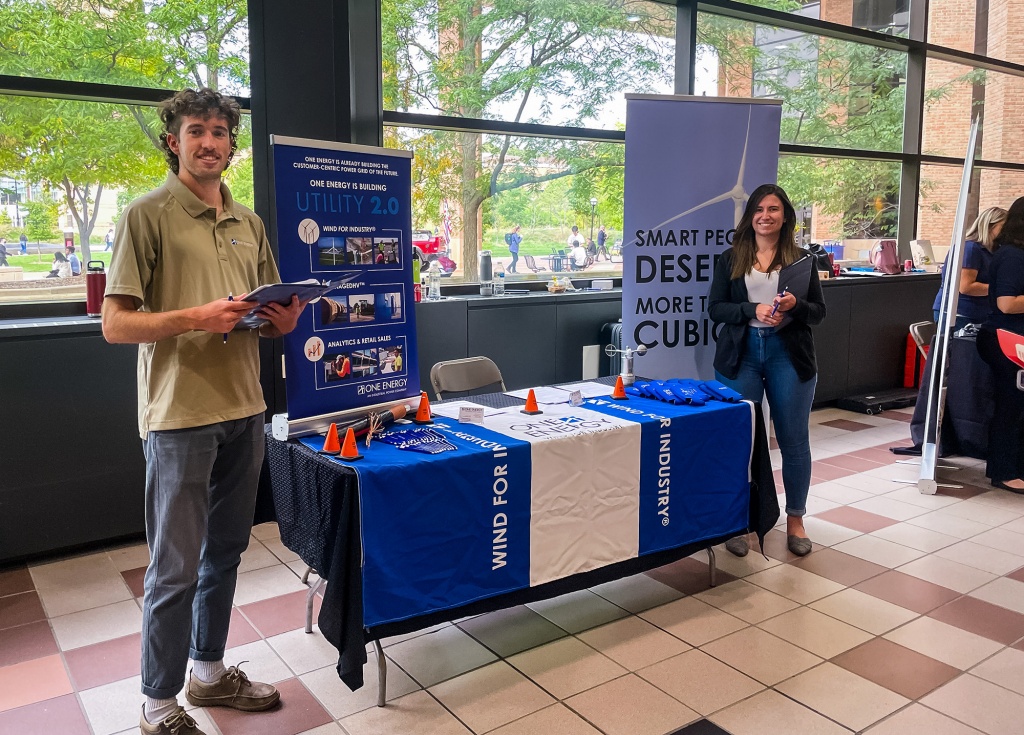 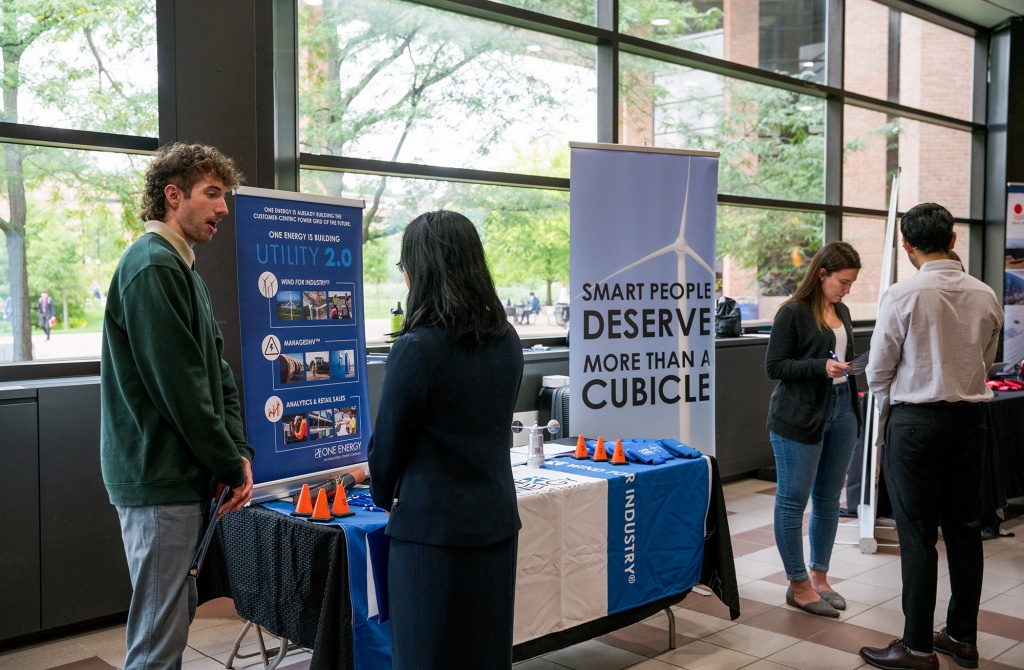 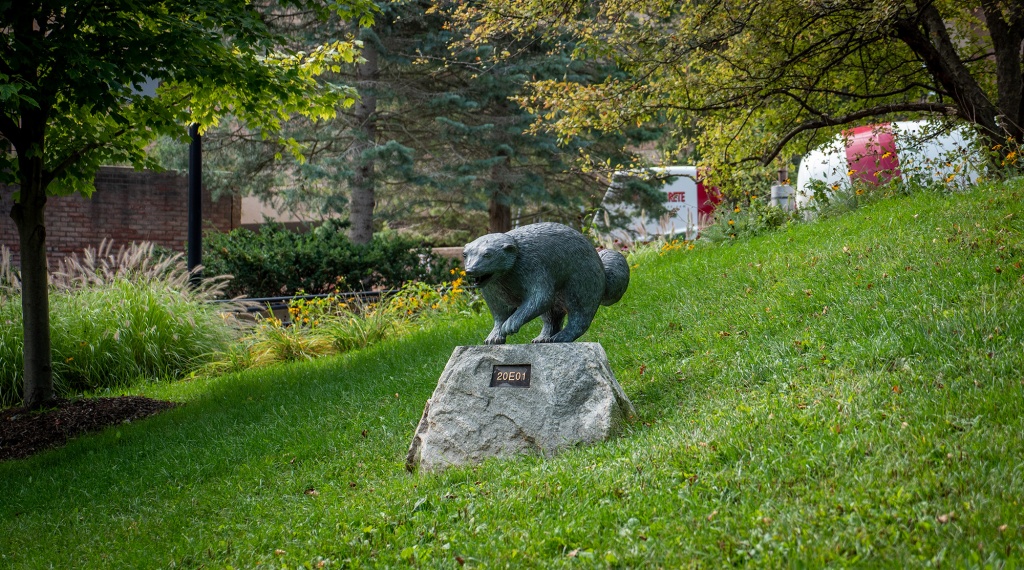 Today we’re learning how light behaves through refraction and reflection. Some of these behaviors can turn light into a way to send messages. For example, the fiber optic cables One Energy uses to communicate with our turbines work by bouncing light through the cable to send messages.

See if you’ve got what it takes to solve this week’s problems, and check back on Friday for the answers! 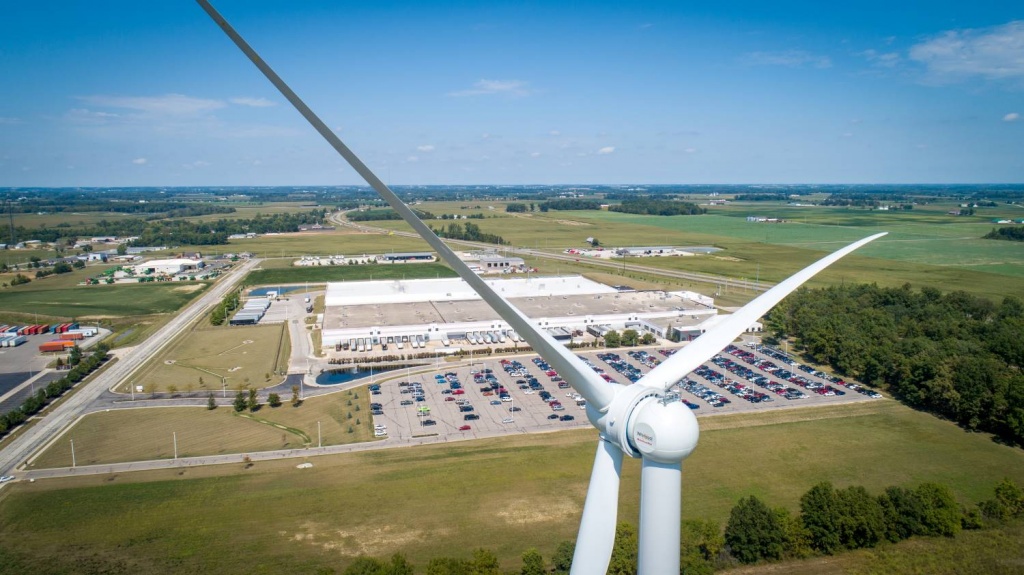 Virtual Tour of a Wind Farm >